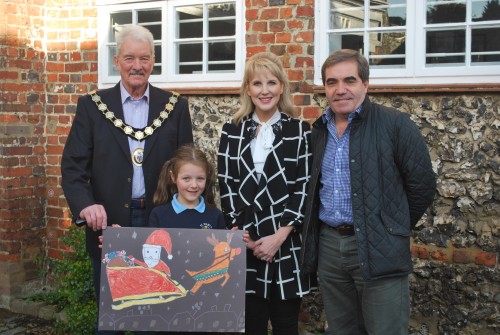 ATC were delighted that this year’s Christmas Card Competition winner, Imogen Bass (aged 7 from St. Mary’s C of E Primary School Old Amersham), was able to join us at the office earlier this week to have an official photograph taken to publicise her fantastic achievement!

This year’s Competition was kindly sponsored by The Entertainer & Hartgraph Print Ltd and we are so very pleased that representatives from both these organisations were able to join us for the photograph.

Imogen was awarded her fantastic prize (a gift voucher to spend in The Entertainer) at this year’s Amersham Community Carol Service as part of the Prize Giving Ceremony!

Councillor Clive Morgan had a very tough job on his hands to whittle down the vast quantity of entries to choose his eventual winner and we are delighted with his choice!

Imogen’s winning design has been featured on the front of this year’s Official Amersham Town Council Christmas Card!

You can find out more about the competition and the other entrants who received prizes on the Christmas page under the Activities section of the website!